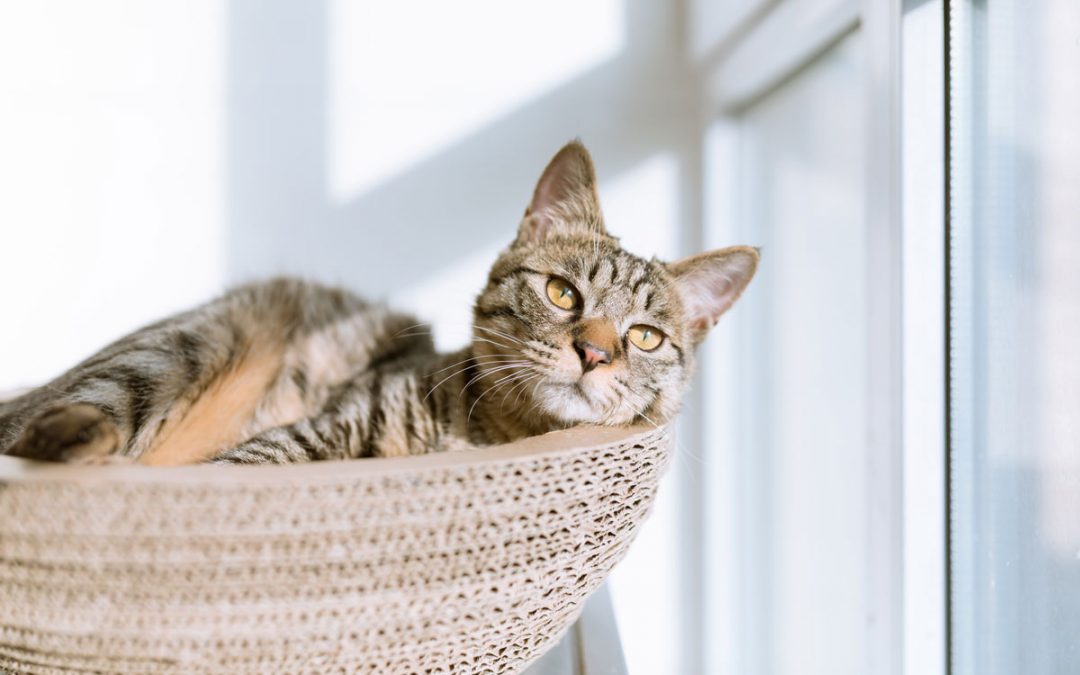 As the planet heats up and extreme heat waves become more common, many of us are scrambling to find ways to keep our companion animals cool. Heat exhaustion and heat stroke are very real possibilities if pets aren’t monitored carefully during extreme heat. During the Pacific “heat dome” in late June, someone told me about a man who posted on Craigslist looking for someone with air conditioning to take in his 150-pound Bull Mastiff for a few days. We will do anything for our animal friends, and it can be difficult when the conditions we and they experience are unprecedented.

During the “heat dome,” the temperature in my kitchen rose to 120F/50C. My office was a bit milder at 95F, so my cat Ariel and I camped out in there. More than a thousand humans in the region died from the heat, along with substantial numbers of wildlife. I know, I know, I wrote a book about grieving the loss of a companion animal, but I don’t want anyone grieving a cat or dog any sooner than necessary.

Cats have a slightly higher body temperature than humans (101-102F/38.2-39.3C). Because of that, they can tolerate mild increases in heat. In general, though, cats and dogs have evolved to exist within the same temperature ranges as humans.

Because cats are covered in fur and can’t sweat, they have limited ways to release heat from their bodies. Cats tend to release heat through their paw pads more than dogs do, but unlike their canine counterparts, cats typically don’t pant. An adult cat who is panting in the heat is already becoming overheated. (The exception to this is during labour and the first days of nursing; in addition, some kittens pant.) Cats are more likely to release heat by staying still in a shaded place, stretching their bodies and drinking more water. Have you ever noticed that your cat seems much, much… longer in hot weather? That’s their way of releasing heat.

Preventing overheating—keeping our cats as cool as possible—is essential to avoid a trip to the veterinary ER during sweltering heat.

If you have AC, that’s awesome, and that should give you a little peace of mind when it comes to your cat. In the Pacific Northwest, we haven’t historically had sustained temperatures above 90F/30C, and most residential buildings (including mine) don’t have AC. The tips below only require a fan, a fridge freezer and running water. 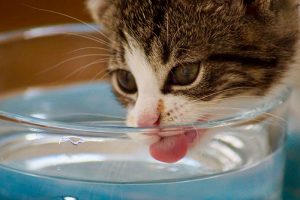 Keep water bowls filled with cool, clean water in multiple locations. In the wild, warm or stagnant water is a likely source of bacteria, so cats have evolved to be wary of warm or dirty water. Check and freshen water bowls more frequently than usual, and drop in some ice cubes to make the water both more appealing and more effective at cooling your cat.

A water fountain can also help your cat stay hydrated by making water more visually inviting. This is one of the most popular cat fountains on Amazon. Fountains don’t necessarily keep the water cool, only flowing. As with water bowls, consider dropping some ice cubes in the bowl (not the reservoir) to make the water even more tempting.

2. Pet them with a damp washcloth—very gently 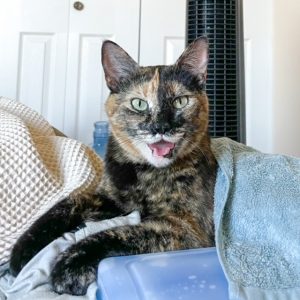 Admittedly, this tip won’t work for all cats. Soak a washcloth in cold water, then wring it out thoroughly, so it’s only just barely damp. Lightly pet or massage your cat’s back with the damp washcloth. They probably won’t be able to feel the water, but the sensation of air going over the washcloth, and their slightly damp fur, provides a cooling effect. (Pro tip: This works great for humans, too!) If at any point your cat shows signs of being upset—airplane ears, fast-moving tail or growls—stop immediately.

By the second day of the heat dome, Ariel began coming to me and “asking” to be wiped down (she would rub her face against the damp washcloth). I was even able to rub her belly, legs and ears with it. As with human and dog ears, cat ears are densely packed with blood vessels, so cooling the ears helps cooler blood to flow through their body.

Bonus: The washcloth trick works really well for humans, too, and you don’t have to wring it out quite as much. Place a damp washcloth or small towel over your body while you’re lying in front of a fan. It works!

3. Your freezer is your best friend (along with your cat or dog) 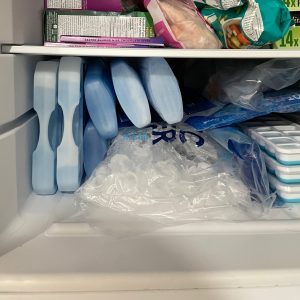 You can take the washcloth trick to the next level by freezing each one. Soak and wring out a number of washcloths, then put them in the freezer. Use parchment to separate the stack; otherwise, the frozen towels will stick together. When the washcloths are frozen, take one out and place it gently on your cat’s back. Again, if the cat resists, stop immediately. If they seem to like it, gently rub the washcloth wherever they’ll let you. The back upper portion of the hind legs is particularly dense with longer fur. Anecdotally, Ariel really seemed to like being cooled off back there.

Your freezer can also provide your cat with some cooler air in their bed. Take a small water bottle and fill it three-quarters of the way (water expands as it freezes, so don’t fill it to the top!). Leave the bottle in the freezer until it’s frozen solid, then place it inside your cat’s bed. As ice evaporates in hot air, it creates a small “halo” of cooler air. Ideally, the bottle will be a couple of inches from the cat—far enough that they aren’t forced into contact with it, yet close enough to radiate a cool ‘halo.’ This ‘evaporative cooling’ is the same principle that ‘swamp coolers’ work on.

Years ago, before I knew much of anything about cats, I rushed Hedda to the veterinary ER only to find she had food poisoning, because I’d left her wet food out in the heat for too long. I felt so awful (and like the worst cat guardian ever). 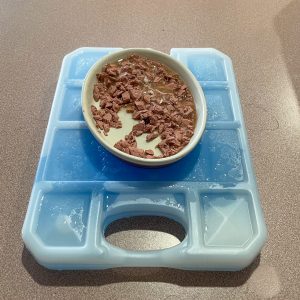 Many cat behaviourists recommend only leaving wet food out for 20 minutes, and I understand the logic of that. However, Ariel rarely eats more than a few bites at a time, so I tend to leave her food out for longer. During the heat dome, I placed a large, flat ice pack (similar to this one) under her wet food dish. This is how automatic wet-food feeders work, too, by including mini ice packs. Even an hour later, the ice pack (and food dish) were still quite cold to the touch.

The smaller, thicker ice packs don’t work, in my experience. They expand and become curved in the freezer—but they’re great for putting behind your neck to keep YOU cool!

For both the frozen bottle above and ice packs, you can wrap the frozen item in Solarize fabric. This is a fabric designed for temperature control; place the shiny side towards the bottle to keep it cold. Bonus: In winter, you can place the fabric shiny side up in their bed for added warmth. Your cat’s body heat will be reflected by the fabric.

Raise your hand if you have a ‘sink cat.’ *Raises hand* Cats are drawn to sinks not only because of the secure shape that keeps them slightly hidden from view, but also because porcelain retains its coolness regardless of external heat. Plus, water. 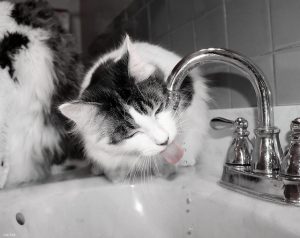 Let your bathtub or sink drip cool water. This isn’t something you want to do all the time (unless you do), because your water bill will add up, and it’s bad for the environment. But during heat waves, dripping water can be a literal lifesaver for your cat. Keeping your cat hydrated in severe heat is really, really important, and—as you know—cats love dripping water.

Make sure to clean your sink thoroughly with cat-safe products. I’m far from a ‘clean freak,’ but I go overboard when it comes to Ariel’s health: I use baking soda and vinegar, then I rinse it half a dozen times with water to make sure I’ve removed all possible residue (think: toothpaste, moisturizer, etc) that could transfer onto Ariel’s fur. Through grooming, your cat will eventually ingest whatever was in the sink. Better not to have any residue that will get on their fur in the first place. 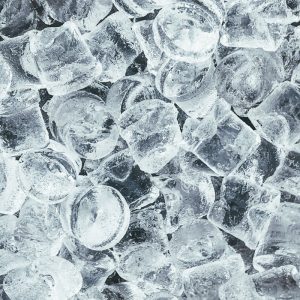 I’ve mentioned ice cubes throughout, because, well, they’re cold, versatile, portable, and pretty easy to make, even for me (LOL).

This is one of the most common pieces of advice for keeping cats cool—probably because it works so well! As I mentioned above, place ice cubes in each water dish to keep the water icy fresh. If you have hardwood or laminate floors, try using an ice cube as a toy—send it flying across the room, within your cat’s line of vision. Many cats will begin to play with the cube or lick it. If you have carpeted floors, try doing the same in your bathtub, and let your cat ‘chase’ the cubes.

Make sure the water is filtered and doesn’t have freezer smells (I learned this the hard way). You can buy covered ice cube trays on Amazon or at your local kitchenware store. These are the ones I use.

Oh, cat hair. It gets everywhere, doesn’t it? Cats have roughly 40 million strands of fur at any given time—no wonder their body temperature is higher than ours! They shed several hundred to thousand strands of fur per day (I’d swear I read 6,000, but now I can’t find the source for that). During heat waves, brush them frequently to remove as much loose hair as possible. Loose hair traps heat; less loose hair equals a cooler cat. In addition to helping your cat stay cool, you’ll be helping their circulation and deepening their bond with you.

Domestic cats rely on us for their well-being. They’re no better equipped to handle extreme heat than we humans are (and arguably, they’re more poorly equipped, with all that fur). By taking a few small, inexpensive steps to help them stay cool, you’re promoting their health—and that, in turn, promotes your well-being.

Have you tried these tips, or others? Leave a comment letting us know how you keep your pets cool during extreme heat events.  And if you’ve found this post helpful, please share it with your social networks.

You have Successfully Subscribed!